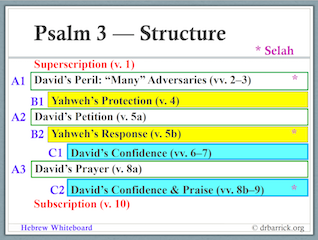 Good detectives build a solid case for indictment by gathering all necessary evidence from a variety of sources. Paying careful attention to details can resolve some of the most difficult problems. In the realm of biblical studies, the identification, nature, and use of inscriptions with psalms tends to be passed off as a waste of time, because many scholars just assume that they were added much later than the actual psalm compositions. However, there is much evidence to the contrary. Let’s examine the available evidence.

In the Psalter 116 of its 150 psalms possess inscriptions (or titles, headings). What many Bible readers fail to realize, however, is the fact that psalm inscriptions occur outside the Psalter.

These pieces of biblical evidence all occur outside the Psalter (although 2 Sam 22 is repeated in Ps 18). Therefore, for the sake of consistency, those who choose not to read or include the psalm inscriptions in the Psalter, should not be reading or including the psalm inscriptions outside the Psalter. Why is the Church so inconsistent on this matter in the modern era–both in the pulpit, in commentaries, and in Bible translations? Skepticism. Hermeneutics of doubt. Denial of the integrity, authenticity, and inerrancy of the biblical text.

The New Testament offers its own pieces of evidence in regard to the integrity and authenticity of the psalm headings:

Psalm inscriptions occur outside the Hebrew Bible as well as within it. The practice of psalm inscriptions appears in a variety of ancient near eastern materials. This fact has not escaped the attention of scholars dealing with the extrabiblical evidence. Consider the observations Kenton L. Sparks makes concerning Mesopotamian hymns, prayers, and laments:

Our modern attempts to classify the Mesopotamian genres . . . are eased by the ancient tendency to place generic labels in the superscripts or subscripts of the text. The labels sometimes corresponded to musical instrumentation used with the piece, such as the BALAG (harp song), TIGI (bass drum song), and ERŠEMMA (tambourine laments), while others related to the format or purpose of the text, such as BALBALE (antiphonal recitation?), ERŠAHUNGA (lament for appeasing the heart), and ŠUILLA (incantation prayers offered with uplifted hands). Modern scholars are not always sure what to make of these terms, which is not surprising given that the ancients sometimes used the labels rather loosely and imprecisely.[1]

Confirming such ancient near eastern evidence, Yitschak Sefati points to Sumerian love poems from ca. 2100-1800 BC–near the time of the biblical patriarchs Abraham, Isaac, and Jacob):

As in most of Sumerian poetic works, the following poems are ascribed to their appropriate categories by the ancient poets themselves with a special subscript at the end of the composition, resembling the superscript of the biblical psalter.[2]

A Hurrian cult song tablet from Ras Shamra (ancient Ugarit) dating to ca. 1400 BC (near the time of the biblical Moses) includes a subscription that reads, “This is a song of the Fall-of-the-Middle, a hymn of the gods, from Urhiya, copied by Ammurapi.”[3] In other words, the ancient near eastern practice of ancient poets including superscriptions and subscriptions for their poems predates the inscriptions on hymns, psalms, prayers, and laments in the Hebrew Bible. It makes no sense at all for biblical scholars to question the authenticity and ancientness of the biblical psalm inscriptions. The Hebrew poets followed many of the same literary conventions as their neighboring cultures.

How ancient are the biblical psalm inscriptions? The meanings of some of the psalm inscriptions’  technical terms were no longer understood at the time of the translation of the Greek Septuagint (ca. 250 BC). For example, the inscription on Psalm 4 in the Hebrew reads, “For the superintendent of music on stringed instruments; a psalm by David.” The Septuagint translators understood it as reading, “Unto the end, in psalms, a song by David.” “For the superintendent of music” (or, “For the chief musician”) was repeatedly misidentified by the Septuagint translators and they also seem to have been guessing about the meaning of neginot (see above under Biblical Evidence) by translating it with the Greek en psalmois. Another example occurs in the inscription to Psalm 46 in which the Hebrew term alamot (most likely “women” or “sopranos”) became “hidden things” (tôn kruphiôn). Such evidence confirms the antiquity of the psalm inscriptions–the meaning of their technical terminology has already been lost by the Hebrew-speaking community by at least 250 BC or before.

In accord with Thirtle’s theory of psalm titles,[4] musical material should be viewed as subscriptions for the preceding psalm, while the literary and historical materials are superscriptions for the following psalm. An excellent example of this division is to be found in the poem in Habakkuk 3. Such an approach also solves some of the nutty problems involving seeming contradictions in the psalm inscriptions. Just one sample will suffice for our purpose in this brief study: Psalms 87 and 88.

A psalm by the sons of Korah.

A psalm by the sons of Korah.

For the choir director;

according to Mahalath Leannoth.

A maskil by Heman the Ezrahite. 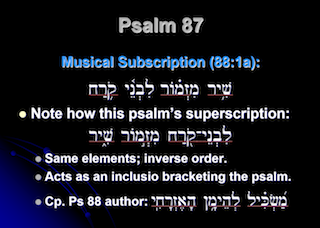 Note that the first two lines (red and blue) of Psalm 87 are repeated in inverse order as the first two lines of Psalm 88. This inverted inclusio emphatically marks off Psalm 87 as the composition of the sons of Korah–the authorial information. Then the typical musical subscription (green) commences with “For the choir director” (see Hab 3:19) and continues with musical instruction (perhaps for the tune?) “according to Mahalath Leannoth.” All of these lines belong to Psalm 87 for its superscription and its subscription. The final line (purple), “A maskil by Heman the Ezrahite,” belongs to Psalm 88 as its literary and authorial superscription. That immediately resolves the apparent conflict in the currently published translations that attributes authorship to the sons of Korah and to Heman the Ezrahite. In addition, Psalm 88 is one of the gloomiest psalms in the Psalter, making a potential mismatch for the tune Mahalath Leannoth that might refer to dancing–a reference more fitting for Psalm 87:7 speaking of singing, flutes (or dancing), and “springs of joy.” Thus, the following pattern provides a more accurate representation:

A psalm by the sons of Korah. A song.

A song. A psalm by the sons of Korah.

For the choir director; according to Mahalath Leannoth.

A maskil by Heman the Ezrahite.

Bible editors, Bible translators, and commentators[5] alike have perpetuated wrongly divided psalm inscriptions. When properly understood (using Hab 3 for our pattern), the musical subscriptions can be properly identified and moved to the end of the preceding psalm while the literary and historical superscriptions can be kept with the subsequent psalm.  The psalm inscriptions are ancient, authoritative, and accurate. The evidence supports their inspiration. We must preserve them, correctly apportion them to their respective psalms, read them privately and publicly, and expound them as we do when they occur in the Old Testament outside the Psalter.

[1]Kenton L. Sparks, Ancient Texts for the Study of the Hebrew Bible: A Guide to the Background Literature (Peabody, MA: Hendrickson Publishers, 2005), 85. Sparks indicates that some of those superscripts and subscripts correspond to musical instrumentation and others to the format or purpose of the text.

[4]James William Thirtle, The Titles of the Psalms: Their Nature and Meaning Explained (London: Henry Frowde, 1904). See, also, John Richard Sampey, “Psalms, Book of,” in The International Standard Bible Encyclopaedia, 5 vols., edited by James Orr, 4:2487-94 (Grand Rapids, MI: Wm. B. Eerdmans Publishing Co., 1939), available here online. More recently, see Bruce K. Waltke, “Superscripts, Postscripts, or Both,” Journal of Biblical Literature 110, no. 4 (1991): 583-96. Unfortunately, many evangelical scholars have ignored Waltke’s article as well as Thirtle’s seminal volume In Hebrew Whiteboard all psalms will be divided in accord with the principles demonstrated by this study.