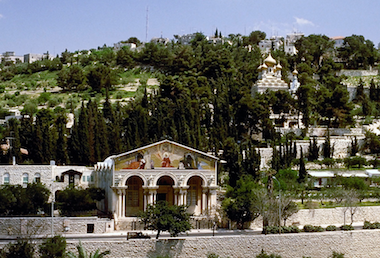 Bible readers often pick up on the apparent fact that Jesus ascended more than one time into heaven following His resurrection. Indeed, there appear to be three different ascensions, each accomplishing different purposes. As we come to the observance of Pentecost, which marks the historical beginning of the New Testament Church (see Acts 2), we do well to remember that its founding occurred after Jesus’ final ascension. Too often we pay so much attention to Jesus’ death and resurrection that we ignore the fact that His death and resurrection alone did not fulfill all that He came to accomplish in His First Advent. Without His ascension, many of the purposes for His coming could not be carried out.

Jesus’ first ascension occurred when He fulfilled Psalm 68:18 (see Ephesians 4:8). At that time He took all of the Old Testament saints (those in “Paradise”) to the third heaven (cp. 2 Corinthians 12:2–4). Jesus took Paradise up to (not into) heaven. Therefore, at that point He had not returned to the Father. He merely transported the Old Testament saints from their compartment in Sheol separated from the compartment of the unsaved by a great gulf (Luke 16:26). Because of this transfer of saints to heaven, all believers now depart this world for heaven directly. Jesus’ first ascension insured that our very next destination following death will be heaven itself (John 14:1–3; 2 Corinthians 5:6–8; Philippians 3:20).

After Jesus took the righteous Old Testament saints up to the boundary of heaven, He returned to the earth so that He might exit the tomb. Before this He had been speaking to the spirits in prison (1 Peter 3:19) to make His victory proclamation. Peter refers to the location as Tartarus (2 Peter 2:4). It most likely occupied at least a portion of the “great gulf” (or “great chasm”) between the compartments of the righteous and unrighteous Old Testament departed spirits in Sheol. As Jesus exited the tomb on Sunday morning (Resurrection Sunday), having rolled back the stone, He encountered Mary Magdalene and said, “Don’t touch me, for I have not yet ascended to My Father” (John 20:17).

Then Jesus ascended to the Father and shortly afterward appeared to the group of women in Matthew 28:9. This ascension was necessary in order to purify by His blood even the heavenly altar (Hebrews 9:7–11, 23–24). This purification was not due to the heavenly altar being unclean or defiled—it was actually the anointing of the altar to initiate its function as a place where human spirits might worship the Godhead much as the Tabernacle altar was anointed (Exodus 29:12). This anointing the altar with blood also signified the formal initiation of the New Covenant (in His blood—cp. Exodus 24:4–8 [at the establishment of the Mosaic Covenant at the foot of Mt Sinai—a stone altar, not the Tabernacle altar]; Matthew 26:28; Mark 14:24; Luke 22:20; 1 Corinthians 11:25).

During the next forty days before His final ascension (Acts 1:9), Jesus appeared to many different individuals (e.g., Luke 24 on the road to Emmaus, and John 21 in Galilee to His disciples). At the end of those forty days, Jesus ascended the Mt. of Olives (see picture above) with His disciples and spoke to them about the coming of the Holy Spirit to empower them in their witness (Acts 1:8). Then He ascended into the sky, going into heaven. The two angels standing nearby then revealed to Jesus’ disciples that He would return just as they had seen Him depart (Acts 1:11).

Christ’s ascensions were necessary for at least the following fourteen reasons:

Without the ascension of Christ, the work of Christ would not be complete. He could not rise from the dead and just remain here, walking around on the earth. He had a heavenly work to accomplish then, now, and in the future. Without the ascension, His sacrificial death and His resurrection would be to no purpose, would fail to fulfill prophecies, and would leave much of His work on our behalf incomplete. Without the ascension, He would not be interceding for us directly to the Father, preparing a future abode for us in heaven, or readying all things for His Second Advent. Because He ascended, we pray, “Come, Lord Jesus!” (Revelation 22:20).