Four Gospels, four viewpoints—do they lead to inconsistency in their testimony concerning the words and deeds of Jesus Christ? Apart from all of their similarities, what should readers do when they find apparent contradictions? Are the Gospels fully trustworthy or in need of some sort of adjustment? Those who deny the inerrancy and authority of Scripture find the choice easy—they assume their superficial reading requires no further examination. But, they merely fall into the trap of careless reading.

In order to enter into our examination of the Gospels, we need to first of all recommit ourselves to the conviction that the Scriptures are God-given (inspired) and inerrant. However, we do not take that view without realizing that we might not know enough to interpret the Scriptures accurately with but a superficial reading. We depend heavily upon the illuminating and teaching work of the Holy Spirit as we study the Word of God. If we find what appear to be errors or contradictions, we must trust that further reading and study of the Scriptures may very well dispel our misunderstanding or misreading. Each problem has a solution—we must find it, if possible.

Secondly, let’s define what we mean by a contradiction. Two statements with conflicting truth claims comprise a contradiction. For example: A. We are meeting in Chicago. B. We are meeting in Boston. These two statements appear contradictory. If one is true, the other appears to be false. Another two examples might be: A. I am William Barrick. B. I am John Wayne. What are the options? In both pairs of statements the first impression is that the one cannot be the same as the other. However, it is also possible that both are wrong—we might be meeting in Miami or I might be Dick Cheney.

Let’s take a set of geographical examples: A. I live in Los Angeles. B. I live in Santa Clarita. Actually, both of these statements, though seemingly contradictory, are true. The solution involves understanding the geographical and political realities of Los Angeles. Santa Clarita is a town in Los Angeles County and is considered a suburb of the greater metropolitan Los Angeles area. In other words, a more accurate understanding of geographical setting and political history can lead to a harmonization of two seemingly contradictory statements.

An example of geographical and political realities in the synoptic Gospels occurs in Matthew 8:28–34 (see also Mark 5:1–20 and Luke 8:26–39). In his account about Jesus healing the demon-possessed man, Matthew identifies the location as the country of the Gadarenes (Matthew 8:28). Mark 5:1 and Luke 8:26, however, identify the place as being in the country of the Gerasenes. So, which place is the correct place? Although the solution to the issue remains obscure, it appears as though Gadara might have been a major city of this province on the eastern shore of the Sea of Galilee. The city about which Mark and Luke speak was Gerasa, a different city in the same province. Although the people may have been known as either Gadarenes (perhaps indicating the immediate location, much closer to the lake, 8–10 km) or Gerasenes (speaking more broadly with the more well-known city of the province), the contradiction is artificial. 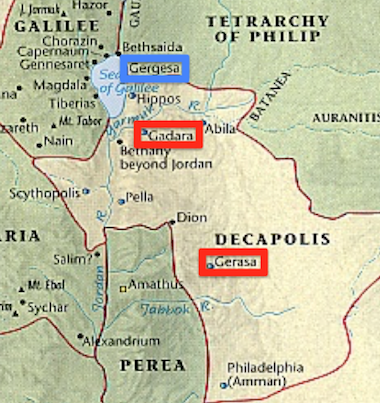 Gerasa stood approximately 56 kilometers from the lake, making it unlikely that inhabitants of that city itself were participants in the events described by the Gospel writers. Thus, Matthew places the actual event and the demon-possessed man in the area of the city of Gadara, while Mark and Luke speak of the province more broadly and generically. This seeming contradiction resulted in later copyists attempting to harmonize the Gospel accounts by altering the texts so as to have all three Gospels read the same. The copyists’ attempts only led to greater confusion by later copyists, translators, and commentators.

Gadara, as the map indicates, sits in the region of the Decapolis whose capital is Gerasa. The Gadarenes reside in the Gerasene region. Interestingly, at least one copyist of Mark 5:1 identified the location as Gergesa—probably because it was closer to the lake and the name had some similarity. Even Gergesa, however, still sits within the region of the Gerasenes. In other words, the seeming contradiction disappears with accurate geographical and historical knowledge. This then offers us just one example teaching us that we need to pay greater attention to the text and less attention to our tendency to read too superficially.