Aroer and the Arnon Gorge

Most references in the Old Testament to Aroer occur with reference to a fortress on the edge of the Arnon Gorge known also as Wadi Mujib. Such a location fits “crest of a mountain” as the possible meaning of the name Aroer — another possible meaning would be “juniper,” a plant common in the area. We must not confuse Aroer on the Arnon with other Aroers, such as Aroer of the Negev, a town of Judah (1 Samuel 30:26–31).

The Gadites rebuilt Aroer on the Arnon (Numbers 32:34) after the Israelite conquest of the region (Deuteronomy 2:36; 3:12; 4:48; Joshua 13:8–22). Sihon, king of the Amorites, ruled over the Moab Plateau from Aroer in the south to the Jabbok River in the north (Joshua 12:2–3). At some point the Reubenites also occupied the region together with the Gadites (see Joshua 13:16 and 1 Chronicles 5:8). Joshua includes both Gad and Reuben together in describing their territory as covering from Mt Hermon in the north to the Arnon Gorge in the south. Eventually, Reuben occupied the southern portion (Joshua 13:15–23), while Gad governed the northern portion of the territory (Joshua 13:24–28). It is possible that the tribe of Reuben failed to maintain its presence and identity, merging with Gad. Thus 1 Samuel 13:7 speaks only of Gad and Gilead. Likewise, Dibon (assigned to Reuben, Joshua 13:17) became Dibon-Gad (Numbers 33:46).

When Jephthah the Israelite judge communicated with the king of the Ammonites regarding the hostility existing between the two nations, he argued that Israel had possessed the region (including Aroer) for 300 years, during which time the Ammonites never contested the Israelite possession of the region (Judges 11:12–28). When Jephthah put down the Ammonite rebellion, he re-established Israel’s possession of Aroer (Judges 11:33). Under King David, Joab took a census of the Israelite troops on both sides of the Jordan and into areas outside Israel, including Aroer (2 Samuel 24:1–9). When Yahweh judges Moab, Aroer will face destruction (Jeremiah 48:19).

We had the privilege of visiting the site of Aroer on the Arnon and looking into a magnificent canyon and the large dam on the river providing water for Jordan (and, conversely, drastically decreasing waterflow into the Dead Sea and causing it to be in constant decline). To access the site we walked through a Bedouin camp where a shepherd was caring for a newborn lamb.

The Mesha Inscription (also known as the Moabite Stone, ca. 840–830 BC) mentions Aroer and credits Mesha (cp. 2 Kings 3:4) with refortifying the fortress following his victory over Israel. Along the edge of the Arnon Gorge we located a number of Byzantine remains marked with crosses.

Aroer sat on the southern boundary of the Israelite territories east of the Jordan River (2 Kings 10:32–33). Hazael of Syria (Aram) captured Aroer along with the Moab plateau, Gilead, and Bashan during the reign of Jehu (2 Kings 10:32–36). Jehu’s reign (841–814 BC) marks the period of the three great inscriptions (Tel Dan Stela, Mesha Stela, and Black Obelisk of Shalmaneser III; see Post #6 under Dibon).

Ancient Aroer is linked with certainty to the site of a small Arab village named ʿAraʿir — and its imposing tell, which is located about 3 miles southeast of Dhiban (biblical Dibon) and 2.5 miles east of the so-called King’s Highway. Three seasons of excavation (1964–1966) by a Spanish team (led by Emilio Olávarri), recovered pottery and a variety of other artifacts dating from about 2250 BC to the third century AD. The excavators identified what they took as an occupational gap during the Middle Bronze Age (2200–1550 BC). Evidence supported occupation in both the Late Bronze Age (1550–1200 BC) and Iron Age (1200–586 BC). Their most significant find comprised a fortress Mesha most likely constructed using large stone blocks laid in header and stretcher style with walls extending approximately 150 feet on each side.

Before looking at the major Edomite sites we visited, we must first understand who the Edomites were. The area of Edom comprises the territory southeast of the Dead Sea. Extrabiblical references to the Edomites comes as early as the 15th century in an Egyptian list during the reign of Thutmose III (1490–1436 BC) giving the name as ʾi-d-má. Moses penned the biblical reference to Edom in Genesis 36:1–9 shortly after Thutmose’s list, but describes a time during the life of Jacob around 1800 BC. Esau (twin brother of Jacob) established Edom in the region of Seir (Genesis 14:6; 32:3; 36:8).

In Judges 1:36 Sela occurs as part of the southernmost boundary of the Amorites — the other site (the Ascent of Scorpions) stands west of the Arabah across of Sela. The prophet Isaiah associates Sela with those who dwell on mountaintops (Isaiah 42:11). The prophet Obadiah depicts the Edomites as being arrogant due to their seemingly unassailable habitations on the clifftops with their fortresses set on the highest heights (Obadiah 3–4). According to 2 Kings 14:7, King Amaziah slew 10,000 men while capturing the fortress of Sela which sat high upon high vertical cliffs on an island of rock. He ordered the survivors of the siege to be thrown off the cliffs (2 Chronicles 25:11–12) and renamed the fortress Joktheel. Jeremiah 49:7–22 announces Yahweh’s judgment on Edom; they will suffer destruction and will not be reoccupied. Jeremiah 49:16 echoes Obadiah’s proclamation.

Biblical Sela at one time had been identified with Umm el-Biyara overlooking the central Petra Valley on the west. However, when Crystal M. Bennett excavated a small Edomite settlement there, remains could only be dated to nearly 100 years after Amaziah in the 7th century BC.

To reach the fortress of Sela we hired smaller vehicles than our large bus to drive us down the switchbacks below the village of Matan toward the floor of a valley between that slope and the opposing slope atop which Sela sits. The short journey left no doubt at all about the secure and protected position of Sela. Walking through a narrow defile and following stairs cut in the rock, we descended even farther to reach the valley floor itself.

As we approached Sela (modern As Sala‘) from the east, we could see a rock relief nearly 600 feet above the valley floor carved into the upper section of a vertical cliff flanking the entry to Sela. The inscription covers about 64 square feet. It includes the standing figure of a Mesopotamian king — most likely Nabonidus, the last king of Babylon (555–539 BC). See Daniel 5:16 — if Daniel would be third in the kingdom, who were first and second? Answer: Nabonidus the king, who at the time was away traveling through Edom to Teima in Arabia, and Belshazzar who was serving as viceregent to his father Nabonidus. Nabonidus is depicted with a conical crown and a long staff in his left hand. The inscription also includes divine symbols of the moon, the winged sun disk, and a star. Due to weathering, the cuneiform inscription itself has mostly disappeared.

We climbed the steep stairway (some portions consisted of the original stone steps and some were later reconstruction) to enter Sela. At the summit we first noted two altars elevated above their surroundings and perched on the very edges of the cliffs. What impressed us next were the cisterns (more than two dozen have been located) and their accompanying feeder channels collecting every possible drop of rainwater. The Edomites and later Nabateans mastered the craft of rain runoff preservation with their carefully planned and intricate water systems. We would later witness even more of their skills at Petra (see Post #8).

Nelson Glueck first identified what has become well known as the Edomite pottery type. He first found this pottery on the northern shore of the Gulf of Aqabah at Tel el-Kheleifeh (Eilat). Edomite pottery displays painted geometric designs. Some pieces of pottery possess triangular knobs. Undecorated pottery sometimes exhibits a distinct shape differing from pottery found in the same timeframe in Judah. Edomite pottery has been found throughout the Edomite plateau and on the west side of the Arabah at a number of sites including Arad and as far west as Kadesh-Barnea.

Our first view of Bozrah came just before sunset as we looked southeast across one of its protective wadis. Driving around the eastern end of that wadi and into the modern village of Buseirah, we took the road across the narrow neck of land attaching the hill to the plateau. The sides of the hill dropped away in steep slopes on three sides. Jordanian authorities have developed the site with information placards and footpaths within the perimeter fence protecting the property.

Crystal Bennett (British School of Archaeology) led excavations of Edomite sites between 1960 and 1980 including Bozrah (Buseirah) from 1971 until 1980. Bozrah appears to have begun settlement in the late 9th century to early 8th century BC and gained its greatest influence in the 7th century BC. 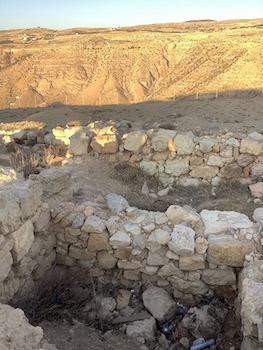 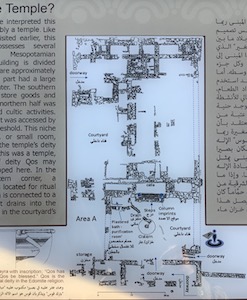 Two phases of the temple (in Area A) and the palace (in Area C) reveal stone and earth platforms or podiums. They are similar to Lachish’s royal palace. An area located northeast of the perimeter wall contains an underground complex given to an unknown use. One sequence of walls appears to be casemate style. Ceramic evidence recovered at Bozrah dates from approximately 750–200 BC.