As I enter yet another time of remembrance at the death of another friend and colleague, the experience brings to mind a mosaic. Yes, a mosaic like those on the ancient synagogue floor in Sepphoris near Nazareth in Israel. Each mosaic comprises the artistic gathering of a variety of images into one overall theme. Inscriptions label certain elements to insure future observers will understand the meaning of an image. Artisans laid out the colorful tiles one by one as they painstakingly selected the right colored tile, shaped each tile to fit in its place, and carefully seated it. At the mosaic’s completion, people could enjoy the result and be reminded of experiences and sights in their own lives. The life mosaic of Dr. James E. Rosscup engages my mind in a review of my own life and experiences even as I rejoice in all the aspects of his. In no way do I mean that my life measures up to his. Jim’s life challenges me to try to be even a fraction of what he demonstrated in his godly character, life of prayer, thirst for God’s Word, love of family, and enchantment with his early years in New Mexico.

Jim wrote and published a number of books reflecting his careful exegesis, godly inclinations, pastoral heart, and keen intellect. Here they are listed in chronological order:

When his beloved wife Mildred, went to be with the Lord, Jim poured hour upon hour into his labor of love to honor and commemorate that very special woman (see the appropriately titled book above). He exemplified the priorities a husband should live up to by leaving full-time teaching early just to care for Mildred and spend her last months together.

All his life Jim loved the Old West. He not only dreamed about it, but he wrote about it. Under the nom de plume of Jim Ross he penned the following three volumes (that I know about): 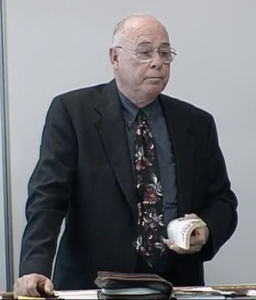 His course at The Master’s Seminary (1987–2014) entitled “Biblical Exposition of Prayer” can still be viewed online. Through Dr. Rosscup’s class on prayer student after student testifies to the profound impact this godly man had upon their lives spiritually. They also remember having breakfast with him at his favorite morning haunt, Big Jim’s (a restaurant about two miles from The Master’s Seminary). I joined him there a couple of times myself.

For his magnum opus on prayer, I wrote the following endorsement, which I found online a few days after learning of his death:

Dr. Rosscup not only writes about prayer; he prays. What he teaches, he practices. As a colleague, I treasure the results of his careful exegesis of Scripture. He pays attention to the minutest detail and is tenacious in his pursuit of solutions to interpretive problems. Jim is not only a teacher, a colleague, an exegete, and a prayer warrior, he loves people. In addition, his gentle southwestern drawl and calm demeanor enhance a deep abiding love for the Old West–something that comes out in his pastime as a Western writer under the nom de plume, Jim Ross. One really gets to know this Christian gentleman and scholar when you saddle up with the Dunlee brothers and ride the New Mexico Territory range in the late 1800’s. Jim’s prayer life is as real and as fragrant as the juniper and sage in Arizona and New Mexico. Thanks for letting us kneel alongside you in prayer and ride along with you through the Scripture, Jim! Jim Rosscup’s work on prayer will become one of the most treasured works I have in my Libronix library and on my shelves.

My memories of Jim will be there whenever I’m reading my Bible, praying, or visiting the Southwest. The words of two songs come to mind — the first a country-western song:

The second an old, precious hymn:

You will be sorely missed, Jim. But we are blessed to have known you, to possess the books you wrote to guide and to cheer us, and to carry the promise of meeting again in heaven around the throne of our heavenly Father and our beloved Savior.

Links to other memorials and tributes: